If you have selected Indonesia for your next trip is good to know that this is really exciting country with many advantages.

We could not you list them all, but we present some highlights from the trip to Indonesia. This is a world famous tourist destination.

Its great location is suitable for tourism for families as well as individual tourists who want to get away from everyday stress.

The island is a perfect destination to spend your honeymoon and also for everybody who want to escape of the cold American or European winter.

Often the beauty of Bali is associated with that of Hawaii.

The reason are the high mountains, volcanoes, dense tropical forests and gorgeous beaches with fine sand and coconut palms.

Bali is home to great culture and traditions, and the locals look like they are always smiling. 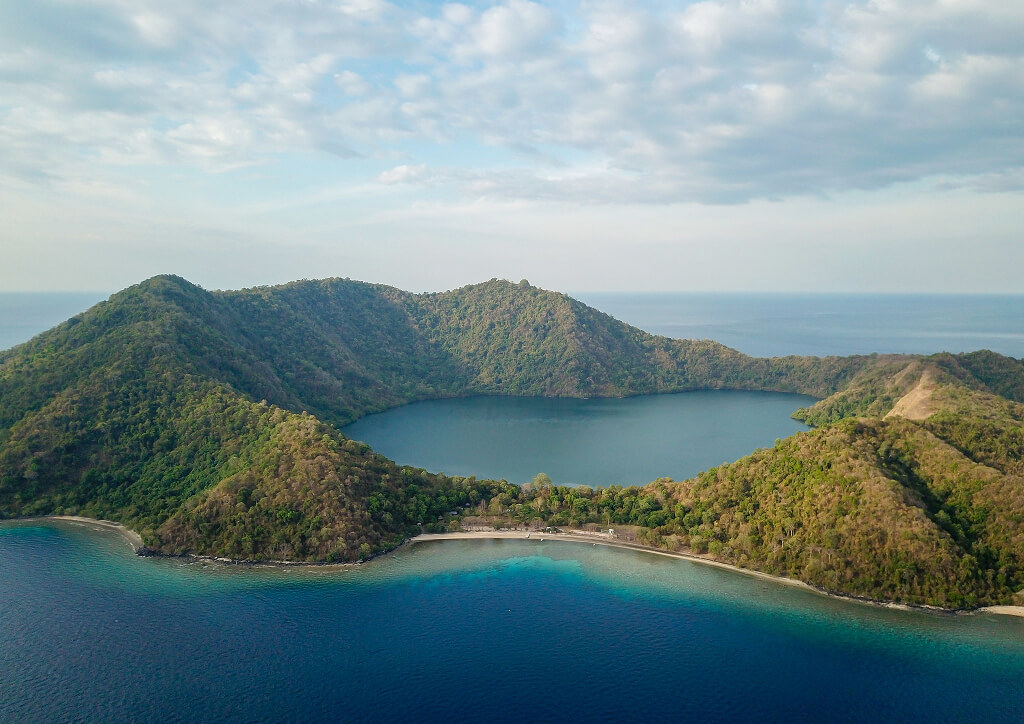 Komodo Island from above by kevin_lavorgna/Flickr

Komodo is a small island covered with dry forest and savanna areas.

It is situated in the south central parts of Indonesia.

Although there is a beautiful scenery, the island is known for something else.

Here roams one of the most ferocious predators of Indonesia – Komodo Dragon.

This is the largest lizard that lives on our planet today.

It reaches a length of 4 meters. It feeds on large mammals, particularly deer.

Although it is not poisonous, the Komodo Dragon’s bite is fatally because in its mouth grow huge numbers of dangerous bacteria and microorganisms.

Komodo is a small island whose population live rural way of life and deals with agriculture and livestock breeding.

The locals kept their animals, because sometimes Komodo Dragons attack domestic animals such as goats to eat them.

Build their homes on high wooden props and use ladder to come home.

The reason is their fear lest any of the dragons to come inside.

There are residents who still bear traces of their meetings with this dangerous reptile!

Borobudur is the most important Buddhist complex in Southeast Asia.

It is located near the town of Magelang in the central parts of Java island.

It is one of the biggest attractions in this part of the world.

It is part of world heritage by UNESCO. It represents a Buddhist complex with over 500 statues of Buddha.

Dates from the ninth century and its location on a small hill makes it even more impressive.

If you want to really immerse yourself in the spirit of Indonesia must surely visit this place.

Here you can feel how multifaceted could be Indonesia.

Although this is an Islamic country, you will feel that local culture is different from that in other Muslim countries because it is heavily influenced by Buddhism. Jakarta at night by alex hanoko/Flickr

The capital of Indonesia is one of the most lively and dynamic cities, you might imagine.

It has an impressive architecture.

Here rise numerous skyscrapers and one of them called the Jakarta Tower (Menara Jakarta) with its 558 meters will be among the tallest buildings in the world.

For now is expected to be completed around 2012.

Ultramodern skyscrapers are complemented by buildings in traditional Asian style.

In Jakarta there is entertainment for everyone.

Here you can visit museums, galleries, restaurants, clubs, cafes and what not.

The place is a paradise for lovers of shopping and there is nothing surprising, since Indonesia is one of the fastest developing countries and therefore shopping centers springing up one after another. Child of Krakatoa by Jane Selomulyo/Flickr

Between the islands of Java and Sumatra is located the island of Krakatoa.

It is a popular tourist destination for lovers of volcanoes.

In 1883 there occurred one of the most powerful and spectacular volcanic eruptions that humanity remember.

The volcano erupted with a terrifying roar that was heard even in Australia!

In atmosphere has been thrown a huge amount of dust and ash.

It is believed that volcanic ash has risen to as 70 – 80 km altitude!

Later next to Krakatoa was “born” a new volcano – Anak Krakatoa, which means “child Krakatoa”.

The cause of volcanic eruptions are common – here Eurasian meet the Indo-Australian continental plate.

The banks are made of black rocks or darkest sand that you can imagine.

Tropical vegetation apparently didn’t  need a lot of time to cover the islands, so here today one can see coconut palms and other exotic species.