A quick review shows that overall the largest producers of alcohol in the world cover specific geographical regions such as Europe and North America. The drink of the gods is most typical for the areas with milder subtropical climate in the world.

Especially sought after and quality are the wines produced in the Mediterranean region.

World-renowned for its quality wines are France, Italy, Spain, Greece, Cyprus and Bulgaria, and most prestigious producers outside Europe are California, Chile and Australia.

Abundant sunshine and dry weather during the summer months in combination with wet mild winters are ideal conditions for growing grapes and producing some famous brands of this ancient beverage.

Connoisseurs say that the wine has a soul.

Its taste shows how the wine was made, how and how long it is stored.

In ancient Greece, was devoted much attention to wine as a drink of good mood and gaiety.

That drink in its various forms is traditional in countries like Britain, Ireland, USA and Canada.

The roots of whiskey can be traced to the British Isles.

In general the whiskey is made usually from malt, but it can be made from different cereals – wheat, oats, barley, rye, corn.

Whiskey lovers in the world are no less than those of wine.

Gin is a transparent alcoholic drink with a pleasant fragrance.

It is produced from cereals and their special flavour due to adding of juniper berries during the production process, which add a nice flavour to the drink.

Gin has always been associated with Holland, but today the largest producer is Great Britain.

The drink is most enjoyable when is consumed chilled with temperature of about 2°C. Beer is the most popular beverage in the world today.

Typical for that beverage is the low alcohol content – usually around 5%.

It is produced in many countries worldwide, but most reputable European countries are respectively Germany, Holland and Czech Republic.

That amber drink is consumed throughout the year, but most attractive is in the hot summer months.

One of the biggest festivals in Europe – Oktoberfest – is dedicated to beer.

It is held each year in Munich in late September – early October.

The drink is produced mainly from barley, but also and from other cereals.

Bourbon is a type of whiskey which, however, differs significantly in taste and ingredients of traditional whiskey and because of this reason we have dealt that beverage separately.

It is a traditional American product produced in the U.S..

Unlike other types of whiskey, it is made from corn.

A distinctive feature is its salty or slightly sour taste which is a result of the production process.

Rum is a sweet alcoholic beverage made from sugar cane in the process of fermentation and distillation.

Its homeland is the Caribbean.

Rum has a distinctive sweet taste and very pleasant flavour and colour which usually resembles amber, although it may be much darker or lighter.

This is a very valuable ingredient in various cocktails as gives an exotic and unique flavour.

Ouzo is a traditional alcoholic drink of Greece.

It is produced on the base of anise, making it closer to the Mastika.

It is consumed chilled and combined with seafood.

The colour is transparent with the characteristic crisp and cool fragrance.

Ouzo is a strong drink that contains sugar.

It is therefore most appropriate to drink moderate quantity in combination with a meal or appetizer. 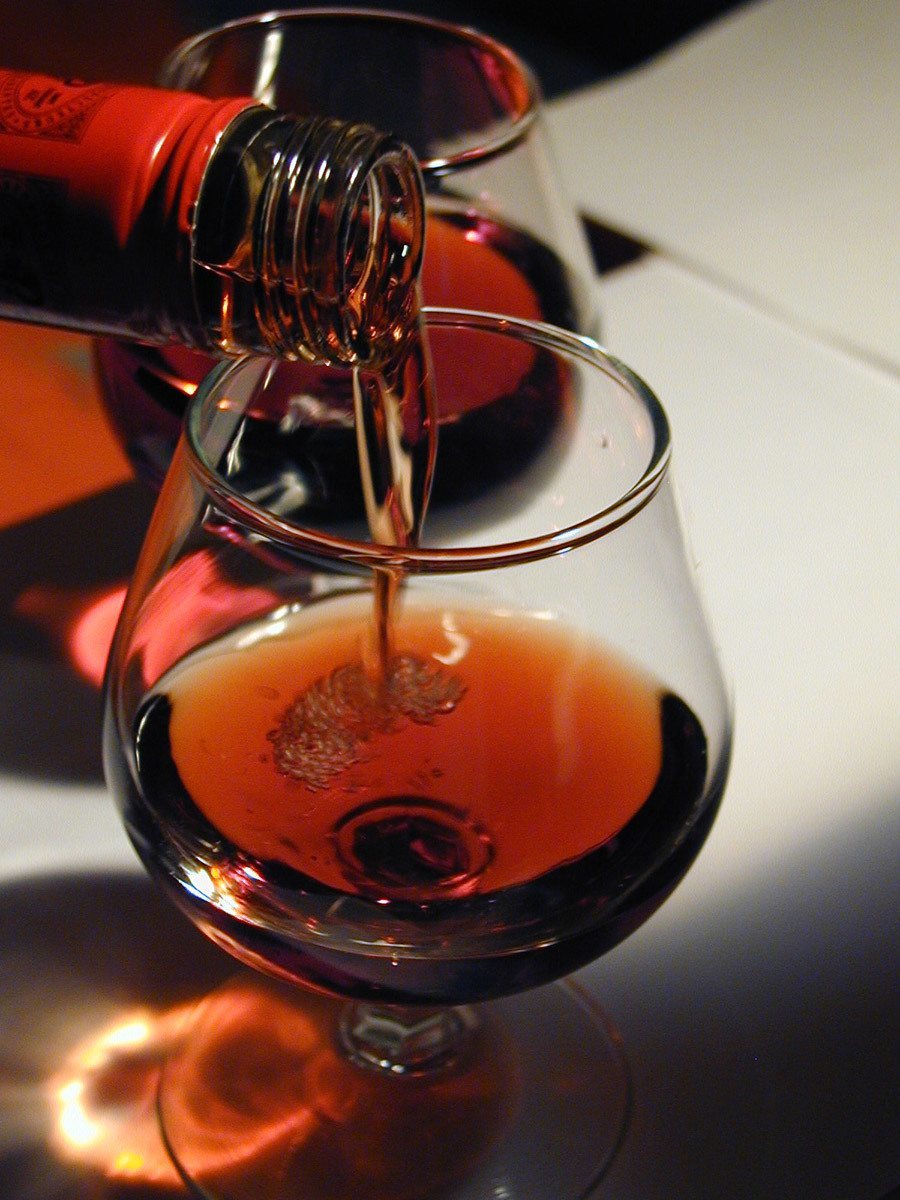 Cognac comes from France, and the name comes from the homonymous area – Cognac.

It is one of the finest, aromatic and sophisticated drinks in the world.

It is made from white wine and the production technology is fairly complex.

The Cognac is obtained after double distillation.

The drink takes a flavour and colour from the oak barrels in which is stored.

The resulting drink is about 40 degrees and usually consists a little bit of caramel for extra flavour.

Mastika is aromatic beverage with fresh scent of anise.

It is consumed most during the hot summer months. Most people prefer that beverage cool (usually about 2 degrees).

When the Mastika is cooled enough you can see floating in the drink visible to the naked eye crystals.

It is believed that Mastika originates from Greece, but it is very popular and is produced in various forms in most countries in the Mediterranean.

It is made from fermented juice of the mountain plant blue agave.

There is often warm amber colour, but can also be quite light yellow or even transparent.

Home of Tequila is Mexico, and the name comes from the eponymous town – Tequila.

The roots of this fiery beverage can be traced back to 3 century BC, when the Aztecs began to extract the juice of blue agave.

Today it is one of the most popular export products to Mexico.

People often believe that tequila must be consumed in small glass from which to drink at one draught.

Brandy is a high quality aromatic alcoholic beverage, which strongly resembles a Cognac.

It is produced from wine.

Characteristic of brandy is, that however it is not necessarily made from grapes.

For this purpose, may be used and other fruits.

For a home of brandy are considered the Islamic countries, from which has been transferred to Spain and from there throughout Europe.

Because of its exceptional taste is often used in making cocktails, creams, cakes and other desserts. This is a unique type of dessert wine with specific and very pleasant taste and aroma.

It’s sweet, usually red and is associated with Portugal, where it is usually produced, but also with Great Britain.

It was discovered in the 17 century with the help of British inventors.

Seeking a way to make Portuguese wine in quality to reach England in excellent condition, they decided to add thereto a little brandy.

It turned out that not only the wine was very durable, but also thus acquired excellent taste and aromatic qualities. This is one of the most aromatic and loved wines.

It is featured with its sparkling and bright soft colours.

This world famous beverage is produced in the Champagne region in France.

In modern society we can hardly imagine the celebration of the official events without traditionally-present glass of “champagne”.

In spite of its white colour the “champagne” is not always made from white grape varieties.

The truth is that the well known sparkling beverage can be produced also from red grapes, but thanks to the production technology, it always acquires again its typical light colour.

Vodka is a traditional alcoholic beverage, which comes from Russia.

It is known from medieval. It is colourless and looks like water.

Russians often joke that the high degree of vodka helps them to spend a little easier the cold and harsh Russian winter.

It is usually produced mainly from cereals (mostly wheat and barley).

The interesting here is that some types of that alcoholic drinks are made from potatoes.

Some kinds of vodka consist also and a little sugar.

Although basically vermouth is wine, its method of preparation makes it an entirely new type of alcohol.

Its typical feature is its incredible aroma, which is achieved thanks to various fragrant herbs such as cardamom, peppermint, elderberry, vanilla and others.

Vermouth is associated with Italy, where began its industrial production for the first time during the 18th century.

Today vermouth is produced in many places worldwide, but most respected producers are Italy, France and Spain.

Sake is the most popular alcoholic beverage in Japan and, together with sushi, it is the most famous worldwide Japanese product.

It is prepared by fermentation of rice.

Hence and the fame of the beverage as arrack.

Sake is usually around 15-20 degrees, which is less than most alcoholic beverages, but more than beer, for example.

It is consumed both cold and warm.

The Japanese usually drink sake during holidays and in ordinary days without reason.

Rakiya is the traditional drink of Bulgaria.

It is usually produced by various types of fruits, but most popular rakiya is made from plums or grapes.

There is also a less popular form of this alcohol drink produced from traditional Bulgarian rose.

It is called Gyulova rakiya.

Anise or other aromatic plants and herbs are often added because to improve the pleasant aroma of rakiya.