Svalbard is a Norwegian archipelago, which consists of more than 1,000 islands.

Two of them, Spitsbergen and Nordaustlandet, are much larger than all the rest of the islands.

Svalbard occupies an area of 61,022 square kilometers and is located in the Arctic Ocean, more than 660 kilometers north of Scandinavia.

The islands are located beyond the polar circle and therefore are very sparsely populated.

Despite the large territory, they are home to only about 2,400 people.

Most of whom are residents of the capital Longyearbyen on the largest island of Spitsbergen. 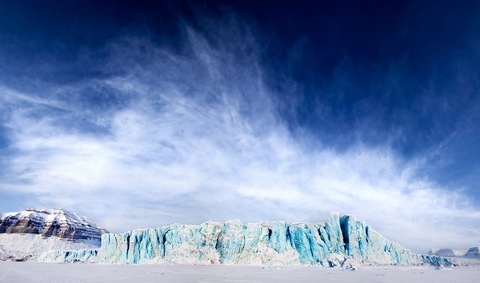 Svalbard have a polar climate with average temperatures between (-16)°C in January and 5°C in July.

The islands have year round dry weather and receive insignificant precipitations.

Another typical feature is that when it rains it usually snows.

Only during the months of June, July and August are possible light and cold rainfalls.

Though influenced by the relatively warm waters of the North Atlantic, the archipelago of Svalbard is a raw place.

Between November 14 and January 29, during the polar night, the sun doesn’t rise above the horizon, and nature puts the wild animals to the ultimate test.

The polar day in Svalbard lasts from April 19 to August 23, and it offers four months of midnight light. The landscape in Svalbard is mostly dominated by steep and rocky mountains.

The highest point of the archipelago rises to a height of 1,712 meters above sea level at Mount Newton.

Giant glaciers, which cover about 60% of the archipelago, descend between the numerous rugged mountain ridges.

They carve deep valleys and slowly change the face of the islands.

In winter everything is covered with deep snow and ice, but during the short summer season most of the thick white cover melts, at least in most low lying areas, leaving about 40% of the islands snowless.

The first to be noticed is the lack of vegetation. There are no trees or bushes.

During the short summer season are able to grow only some cold-resistant species of low herbaceous plants.

As a result of thousands of years of glacial action, today Svalbard has a strongly indented coastline with hundreds of small and large fjords with mirror-like calm waters.

Throughout the archipelago wander huge polar bears, polar foxes, reindeer and many other interesting species of animals.

There is also a great diversity of cold-loving seabirds.

Among the most famous are the representatives of the sea parrot.

The waters around the islands are rich in fish and some species of large marine mammals such as seals and whales.

Today approximately 65% of the total area of the islands of Svalbard has the status of a protected area. Ancient Scandinavian sailors were probably the first people to discover the archipelago of Svalbard.

In practice, however, the Dutchman William Barents (Willem Barentsz) was the first documented discoverer of the archipelago.

He reached the islands in 1596. In the following centuries Svalbard became an important whaling center.

However, the first local permanent settlements appeared in the 20th century, hundreds of years later, when the rich deposits of minerals were discovered.

Nowadays the population of Svalbard is relatively diverse.

The majority of residents are Norwegians, followed by a smaller number of Russians, Ukrainians and other immigrants.

Virtually the entire island’s economy is concentrated in the capital Longyearbyen. Best Travel Tips to Longyearbyen, Norway (For Your First Trip)