One of the things that make Lisbon such a magical place to live is the fact that the city seems to have everything.

When people visit a new place, they often say they don’t like at least one thing.

It could be everything – in one city the weather is bad, while in another the food is not very tasteful.

Lisbon, however, is different.

And that’s not just an impression.

After spending some time in the Portuguese capital, you will fall in love with the city, because it offers much more than you would have ever expected.

1. Lovely weather throughout the year Lisbon is considered the metropolis with the best climate in Europe, and for this reason many people come here to spend their vacation or even for permanently.

The weather here is really mild and pleasant, which makes people spend more time outdoors every day, regardless of the season.

It has a typical Mediterranean climate with high temperatures and plenty of sunshine.

The city enjoys more than 300 sunny or partially sunny days a year, which makes it ideal for sunbathing on the beach or relaxing along the swimming pool even in some warmer winter days.

Of course, in winter the ocean is colder but if you just want to enjoy the sun in a T-shirt you will definitely have your great moments.

However, the Atlantic Ocean brings pleasant coolness and keeps the summer heat bearable.

Usually, the average daily temperature in July and August is about 28°C, although heat waves with temperatures of about 35 – 36°C are not impossible. The average temperature during the day from April to October is steadily over 20°C.

The winter months are quite pleasant, and the ocean plays the crucial role again.

The average temperature in January and February is about 15°C, but sometimes it reaches about 18 – 19°C.

Of course, winter nights are much cooler but still relatively pleasant with temperatures of around 8 – 9°C.

Winters in the city are suitable for long walks, whether in the city, in the park, along the coast or in nature.

From April to late October you should always have some summer clothing near at hand.

As we already mentioned, there are some wonderful days to walk along the shore in a T-shirt even in winter. 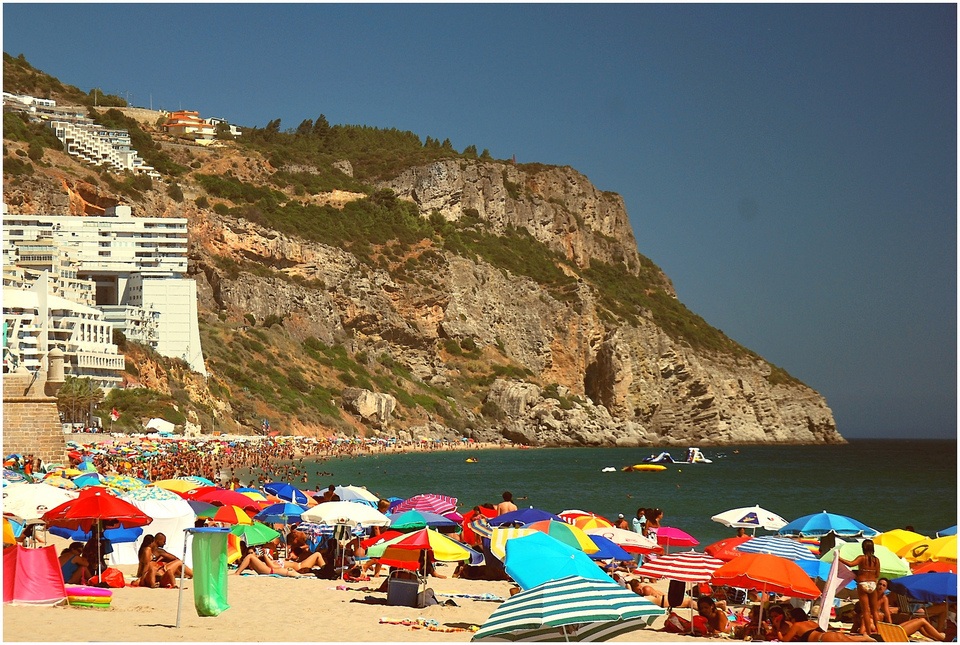 Beach of Sesimbra by Freebird

2. The beaches are among the best in Europe The beaches in Lisbon and the area are among the best in Europe.

No doubt there is no other metropolis on continent to offer so wonderful beaches.

It is very interesting to say that most European capitals are located far from the coast but Lisbon is one of the very few exceptions.

Near the city center and relatively close to its numerous attractions are Praia de Santo Amaro and Praia de Carcavelos.

They are very comfortable to use even during the lunch break in the middle of the workday.

If you have time to visit some of the more distanced beaches, Estoril and Cascais are waiting for you in the western part of the metropolis.

Besides its beautiful beaches, Estoril and Cascais offer a large number of great restaurants and places to have a cold drink after a long day at the beach.

Another favorite place of the residents of Lisbon is the beach of Caparica.

The superb shoreline attracts lovers of surfing, swimming and sunbathing. If you look to the south, the coastline seems endless.

The view to the north is very different, diversified from the picturesque silhouette of the vibrant coastal metropolis.

Golden sand, clear ocean waters and deep blue sky make the day on the beach in Caparica the best solution to deal with the everyday stress.

If you are willing to visit some more remote area, there is a quiet place, devoid of the dynamics and noise, just about 30 kilometers south of Lisbon.

Here, between the towns of Sesimbra and Setubal, you will find some small but charming beaches.

The coastal area is picturesque and offers excellent opportunities for walking.

The place is considered one of the most prestigious tourist destinations in Europe and offers excellent opportunities for ecotourism.

The beach? It is just out of this world and is considered one of the most preserved on the Iberian Peninsula.

3. The city is among the most tolerant in the world

The capital of Portugal, Lisbon, is among the most liberal and welcoming cities on the planet.

In this respect, the romantic metropolis on the Atlantic coast ranks alongside cities such as San Francisco, Amsterdam, Stockholm, Helsinki or Barcelona.

Everybody here finds its place in the society, no matter whether they are locals or immigrants.

The atmosphere of acceptance and peaceful coexistence turns Lisbon into a palette of cultures where you can feel the freedom in the air at every step.

4. One of the safest large cities in the world The risks of becoming a victim of a crime exist everywhere.

However, they are generally much lower in Europe than in other parts of the world.

In fact, from the top 10 safest countries in the world 7 are located in Europe.

Talking about that, Lisbon stands out as one of the safest places on the continent to live.

The city competes with other European capitals such as Vienna and Helsinki and is one of the three safest European metropolises. Almada seen from above by Pedro Ribeiro Simões

After the global economic crisis affected seriously most of the developed countries in the world, including Portugal, the country managed to gather strength and to turn its problems into advantages.

Trying to overcome the high unemployment rate, the country decided to bet on entrepreneurship.

Today, years later, Lisbon is one of the leading startup centers in the world.

It offers some of the best conditions for starting a new business, especially in the high-tech sector.

The city offers everything you need for that purpose – appropriate legislation, exemptions and incentives, highly qualified specialists speaking different languages, good office space prices and others.

Moreover, Lisbon itself is dynamic enough to offer a favorable environment for any business.

After painful reforms, today the city lives a new life, and it promises to become one of the engines of economic growth in Europe. Today we live in a world of globalization. People go to study, work and live in different parts of the world.

Of course, we can’t speak the language of every single place we visit.

For this reason, in modern times English language is extremely valuable. It is essential for the good communication between us.

Nowadays, the percentage of English speakers is one of the determining factor whether a city will be more or less attractive place to live.

This is a good news for Lisbon because it is considered the most English-speaking city in Southern Europe.

Of course, we don’t count Malta because English is one of the officials languages there.

Today over 90% of the population of Lisbon speaks at least to some extent the global language.

Of course, once you’re here, you can still enjoy the pleasure to explore and learn Portuguese, which is considered one of the most pleasant and sophisticated languages in the world.

7. City of history, architecture and culture Quinta do Regaleiro by peña

City of seafarers and discoverers, Lisbon is the second oldest capital in Europe after Athens.

With such a long and rich history, it is not surprising that this place is considered one of the cultural capitals of Europe.

Today they call it “The New Berlin” or “The New Barcelona” because it attracts artists, actors, musicians, sculptors and other artists looking for inspiration.

The combination between the long history of the city and the modern thinking of the huge art community is what makes the capital of Portugal unique.

Nowadays, if you are one of the more sensitive people, you will be able to enjoy the transformation of Lisbon and to see how day after day it rises into a world’s cultural capital.

If you are a connoisseur of architecture and love the Gothic style, this is one of the best places to visit in Europe.

8. A huge choice of places to visit This is for sure one of the cities in Europe which offer the biggest choice of boutique cafes and restaurants.

These places could be your inspiration if you’re an artist, but this is also a great way to insert some style and sophistication in your everyday life.

The variety of luxury shops is also impressive.

All these advantages make Lisbon a smaller version of London or Paris. There are also many museums to visit.

The rich history of the city is well preserved, so today for the residents and the guests of the city is easy to experience this historical atmosphere. In the heart of the Portuguese capital is comfortably situated one of the largest urban parks in Europe.

So vast green area is a rare thing to see, especially for a country with so warm and sunny climate such as Portugal.

However, this is a fact.

Not far from the narrow cobbled streets of the old town is located The Monsanto Forest Park.

Here the silence of the forest and the pleasant shade of huge trees, attract lovers of nature from all parts of the city.

Here you can touch this green treasure with an area of 1000 hectares.

Except native species of trees, you can find also species from all around the world planted here.

Located in a hilly area, the park offers a number of places which reveal breathtaking views of the city streets and the bridge “April 25”, which is practically the same as the famous Golden Gate bridge in San Francisco, California.

Besides plants, the park is a place where you can find some very rare animals, including the red squirrel and various species of exotic birds.

10. Some of the best prices in Europe

Lisbon has a pretty good reputation of being an affordable destination. It is considered the city with the best prices of goods and services in Western Europe.

The truth is that in the Portuguese capital a person could live a very good standard without spending too much money.

If you live with the same incomes in a city such as London, Oslo or Paris, you will definitely find a huge difference.

In fact, Lisbon is much more affordable place to live even in comparison with many cities in Eastern Europe.

Of course, the city is big and diversified, which means that there are many luxury shops and boutiques as well.

This is why it is a good place to live or visit for everyone. The infrastructure of Lisbon is excellent.

First of all, most of the city, especially when it comes to the central part, is very easily accessible on foot or by bike.

The city is well known for its great metro system, but if you prefer to travel by bus, then you can reach with ease every single place in the Portuguese capital.

If you are one of those enthusiasts who want to feel the real taste of the city, you should try a short tram ride.

This is deeply recommended because trams are actually one of the symbols of the metropolis. The capital of Portugal is one of the world’s culinary capitals.

If your lifestyle includes a fondness for fine food and drinks, it is good to know that the city is a place where gourmet tourism is booming.

Here you can experience the pleasure of the rich Portuguese cuisine.

Indeed, the number of great local alcoholic and soft drinks to try is just huge.

What is better than to enjoy the sunset over one of the most beautiful cities in the world while holding in hand a glass of the famous local Port wine in some chic restaurant with a nice panoramic view?

In addition, as a typical European city, Lisbon offers easy access any type of fresh food of the highest possible quality, while the prices are quite attractive.

10 reasons to spend your next vacation on the Algarve